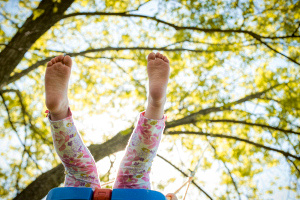 Last year I bought my daughter one of those outdoor swings you tie to a tree.  She had never shown any interest in swinging when we were at the park, but LOVED being swung around like a monkey by any poor sap who would take pity on her.  I set out to get a swing for our backyard convinced that she would love it, or at the very least, slowy learn to love it.  Much to my dismay, she was absolutely terrified of it and wouldn’t even consent to let me strap her in it just to sit.  Lonely and unused, the swing got packed away at the end of summer in our shed, in hopes to see brighter days the next season.  Sometime this spring I hung it up again and didn’t ask her to sit in it.  I thought I would just casually leave it hanging where she would see it in hopes that it would pique here interest.  Just like last season, the swing was passed over many times without even a glance, but I didn’t have the heart to force her to try it.   How could a rambunctious, fearless toddler such as my own be afraid of a swing?  I began to organize Mission: “do not fear the swing” in my head, but quickly had to put it on the back burner when Michael and I had to go out of town to shoot a wedding one weekend.  When I called my in-laws to check in Sunday morning, I was informed that my daughter was “outside on the swing with Papa, and has been for about 45 minutes.”  I had to see it to believe it, but she was indeed over her fear of the big, bad swing.  I’m not sure I want to know how he did it, but thanks to Papa Trigg for getting us over that hump! 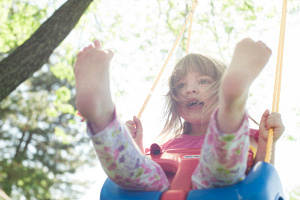 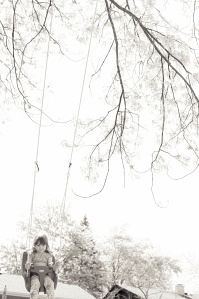 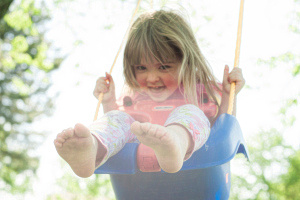 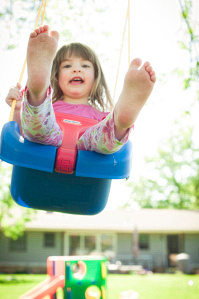