I love shooting outdoors.  I love everything about nature in my photos, and I think it shows.  I seize any chance I get to plunk a baby down in the tall grass and weeds and whip out my camera to make some natural terrific-ness happen.  But every now and again I get an itch to shoot somewhere out of my norm, and what usually happens is I drag my kids here, there and everywhere to get it out of my system.  Thing is, my own kids seldom sit still long enough to get more than one shot.  Imagine my delight when I got the opportunity to photograph this little sweetie a few blocks from her home downtown Chicago.  I’ve shot downtown several times before, but never for a baby shoot.  I tried to marry some urban deliciousness with the soft and pure nature of a baby.  Just to add a little excitement into the mix, it was an unusually chilly June day, cloudy and rainy with a layer of fog hiding the tops of our buildings.  What began as apprehension about the weather turned into a silver lining.  We did this shoot in about an hour at a small dog park just before the rain, leaving to park practically empty.  The rain held off long enough for us to shoot, and the clouds provided a giant soft box, which meant soft light for a pretty baby sitting amongst the skyscrapers.  M was generous with the smiles and nothing short of adorable. 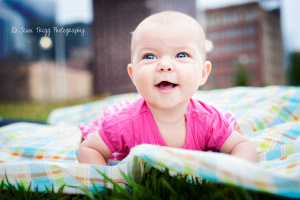 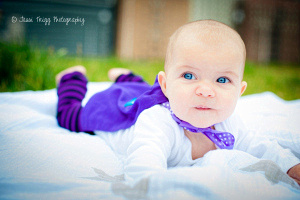 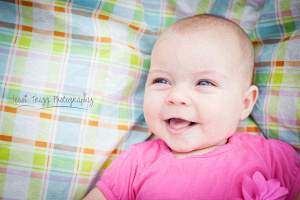